Written By : Martin Wood
Directed By : Martin Wood
Guest Stars : Jodi Balfour
Airs : Space 18-Nov-11, Syfy (US) 18-Nov-11, SciFi (Aus) 16-Dec-11
NOTE : entries with a double asterisk are included tentatively as they have been identified with an episode based solely on a rough shooting schedule. They may not belong to this episode.

When a team from the UK Sanctuary gets in trouble on a stranded icebreaker in the Bering Sea, Magnus and Will must figure out who is behind the mysterious happenings at sea.

Henry, Declan and a team from the UK Sanctuary go to the Bering Sea to investigate a mystery on a shipwrecked icebreaker, where the crew has killed the Abnormals on board and each other.

Magnus and Will struggle to save an icebreaker stranded under mysterious circumstances.

THR: What’s coming up during Season 4 of Sanctuary?

Tapping: We painted ourselves in an impossible-to-get-out-of corner at the end of Season 3 and we start in a time and place that is very special to my character [Dr. Helen Magnus], but is rich with history and stories. I directed the second episode and Robin Dunne directed the sixth episode. We do an episode on a tropical island. We do an episode on an ice breaker on the Behring Sea. The Victorian era episode, it was raining inside the studio. You’ll see a great directing turn from Robin Dunne.

SANCTUARY
The Canadian-produced series about an immortal doctor (Amanda Tapping) among otherworldly creatures is in its fourth season. Tapping was on a sound stage this week filming some Arctic-set scenes.

Had a great day of shooting today on #Sanctuary. Thanks to @RyRobbins, @Amandatapping, @robindunne & others for being so lovely. 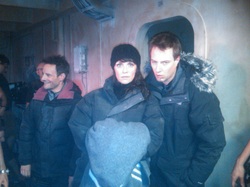 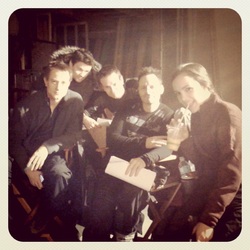 @RainbowFrancks Working during the next one!! Can you believe it?! You should come by and say hello! Martin's directing this one.

Ispysancthurs: Guess which resident Sanctuarian is writing a script for the show this season? #Sanctuary
ISPYSANCTHURS: Martin Wood is writing one of the episodes this season! #Sanctuary
#Sanctuary: But the most challenging thing about Martin's writing style is keeping him locked to a chair because he's always on the move!