Magnus awakens in the ruins of a sanctuary with no memory of how the facility and city were laid to waste. An encounter with a savage creature and a cold rendezvous with Will lead to a shocking revelation.

A disoriented Magnus wakes up to find the Sanctuary in ruins and the entire city decimated - with no memory of how the devastation occurred. While surveying the destruction, she is attacked by an inhuman creature but saved by two armed men who stun her and take her to an abandoned warehouse. After being hosed down and left shivering and exhausted, Magnus fears the worst when a battle-scarred figure enters the room. 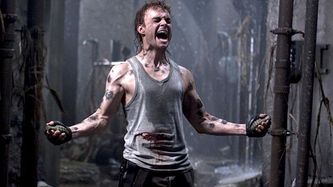 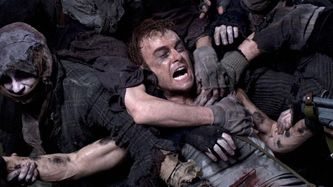 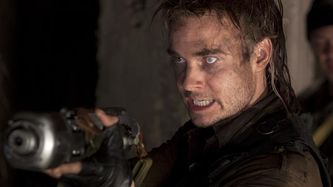 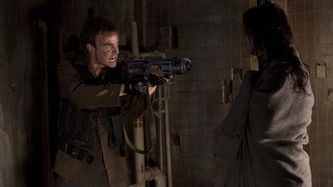 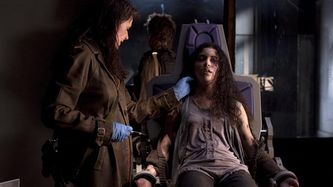 Season two is more about the now instead of flashbacks, but according to Martin we get a "future flash." The future flash ep is "Padua Noctoris" which focuses on a probable future. Amanda says we'll see "Will unlike you've ever seen him before" and that it was "freaky",seeing Robin in character for this ep. It's set in a post-apocalyptic era and we'll see a decayed Sanctuary, Magnus' office destroyed, band -- most frightening --Will with mullet!

RoX Edit : On reviewing the video from the panel, the title of the episode is more like Pavor Nocturnus

Photo of Robin on set.

"just read James "Thorpedo" Thorpe's first half of Ep 5 - will be dark and amazing story. Hoohah!"

"Writing in a quiet house is a gift. Trying to power through two acts of post apocalyptic Sanctuary...."

So: Today is Saturday. And I am at home writing the latter half of Ep. 5 for season 2 of Sanctuary. This ep is going to be a whizbang story about a future gone mad (as all good sci fi yarns are...) and how our hero Magnus tries to figure out where and how it all went sideways. Hey season 2 means you can finally roll out that Alt Future concept you've been chewing on for decades.

I'm writing the later half because our erstwhile writer/creative consultant James Thorpe is penning the first half in a speedily concocted co-write venture. We need a script this week. Why the rush? Well the script we had ALL READY TO GO was pushed down in the schedule because of a scheduling issue with everyone's fav genius vampire Jonathon Young. Yes that's right, ep 5 WAS going to be a Tesla story, but you'll have to wait till ep 11 for it to hit your screens. In the meantime: Magnus. A dark future. Extinction of humans. Some light zombification...